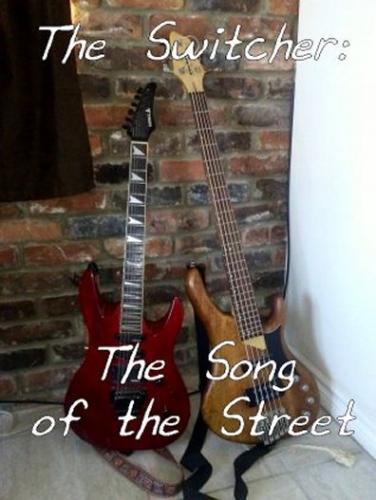 ©2020 - Foxxe Wilder
A typical day for a street musician takes a sharp turn into the atypical.

Tracey looked out over the city from Shadoe's apartment balcony. The view of the city from the twenty-third floor with the mountains in the background was spectacular. The balcony had become her favourite spot, that is when it was not raining, which was a rarity for the area.

She sat down on one of the two the wicker lawn chairs and lit up a joint. It was her only retreat from all the craziness of the recent past.

Over the past two weeks she was unceremoniously uprooted from her old life as a thirty-four year old male street musician and dumped into the body of a seventeen year old female acquaintance that she barely knew.

Then she was saved from capture by a group of mysterious people in dark suits by a mutual female friend who had a safe place in which she was allowed to stay so she could hide out from the aggressive pursuers in dark suits and learn how to start a new life.

Then came five days of menstruation; an experience that, as a man, she had previously been totally free of. Now however things had changed rather drastically and this was going to be a fact of life for her every month for the next thirty or forty years.

Her only real comfort was the guitar. Within it she could hold all her pains, fears, loves and happiness and in playing it, helped her to release these emotions in a way that she was more attuned to

She was still painfully working on making callouses on the tips of her fingers on her left hand. Her finger coordination was improving on the fretboard and she was pleasantly surprised with her new singing voice.

As Damien, she had rather decent vocal range from the lows of Long John Baldry to the highs of David Bowie, but now her range was incredible!

As a vocalist she was ecstatic over learning her new range. Although she did lose a small portion of her low end, the gained almost a full octave on the high end. She could sing notes now that Damien could only fantasize about and the tone of Tracey's voice was phenomenal. She could sound like Pat Benatar, Joan Jett, Lita Ford, and as high as Joni Mitchell. This refuelled her love for music performance so she practised as much as she could without bothering Shadoe or the neighbours.

In the past few weeks though, Shadoe had Tracey leave the apartment six times and Tracey was running out of places to go that she hadn't been before. It was becoming a bit stressful for Tracey to have to create things to do by herself for anywhere from two hours to four depending upon the client.

During the first week, Tracey tried not to think about what was going on in her absence. She didn't need to know nor did she want to know. The idea of sex scared her.

It had taken her first menses to realize just how real this experience was. Her male life died in screaming agony with every cramp and every tear. The reality was, if she was ever going to have a sex life again it would definitely be as a woman.

She found her taste in music had shifted subtly too. Damien was the type of guy who never danced and often claimed he couldn't dance, so listening to dance music just didn't happen.

Tracey's natural likes of music included dance music and with her build it should have been no surprise. Tracey's style of clothing in the past thinly disguised a very trim and lithe dancer's build.

It was also in Trace's nature to dance. It was part of who she was, and now it was also part of who Tracey was. She didn't lose her like of the music that Damien liked however she did gain a liking for what Trace preferred.

This, of course also influenced Tracey's relearning of guitar. There were new techniques that she learned that Damien never knew.

There had been so many different things happening to Tracey over the past two weeks that it was easy to forget that her life was anything different from what it was.

Tracey was going through it all essentially, alone. Yes she had the constant company and help from Shadoe but Tracey could never mention to her precisely who she truly was. She wasn't quite sure just how she could convince Shadoe about it in any case.

In fact, there had been an increasing amount of days where Tracey woke up and started her day almost unaware of her past life. She generally snapped out of it anywhere from twelve noon to two o'clock in the afternoon. When this happened she tended to suffer from minor anxiety attacks.

She normally had to suffer these attacks alone, but today she was going to risk going for a leisurely walk to get the tensions out.

Maybe it was cabin fever combined with the identity questions but it did feel liberating to get out.

Tracey had settled in to who she was but was starting to feel restless. Re-learning the guitar did take up a lot of her time but she was feeling the pull of social life that all teenagers experience sooner or later.

Tracey felt very confident that she was never known in the neighbourhood that Shadoe lived in. She didn't know at all when she first moved there but now she felt sure of it.

She avoided the highly populated streets and kept her walk leisurely and confident. This was how Trace fooled the world that she had an abundance of confidence when she was actually more reserved in nature.

Tracey had developed a few habits of Trace's. They were subtle in nature; they ranged between personality traits, speech patterns and even subconscious body language.

One of them was Trace's tendency to stick out in the crowd.

Tracey felt an exhilaration she had never felt before, there was an ethereal happiness in her soul. Why she didn't know but she felt good.

As she walked along her walk changed to a happy skipping. The freedom of the streets were beckoning to her once again.

Tracey rounded a corner and spied a small outdoor farmer's market. She smiled as she headed towards the enticing sights, smells and sounds.

Tracey halted abruptly, spying something out of the corner of her eye that gave her a sense of foreboding.

Parked just a few metres from the entrance to the farmer's market were 2 identical black SUVs. Each had an identical dark tint to the windows.

Tracey's joyous skip vanished. She stood there for a moment, her long ingrained street senses perked up into action.

Her eyes scanned the crowds warily. Two dark identical SUVs parked side by side at this point only meant one thing to her.

She inspected each person with her gaze and finally found what she was fearful of seeing.

There were two people in dark suits watching her some distance away within the confines of the market.

“Okay now, “ she told herself, “play it cool. You've run from the cops more than a few times over the years. How bad can these jerk offs be?”

“To turn back now would only invite a chase,” Tracey reasoned so she continued onward her eyes scanning both sides of the street for any hidden options.

She strolled up to a sidewalk that led to the side of low level apartment building and just as she left sight of the street she started to run diagonally across the various lots, lithely leaping over the few fences in between.

Upon reaching the street she slowed only long enough to get her bearings.

As Damien, she had often walked the streets very late at night when he was homeless, looking for places to sleep. As a result of these wanderings he had come to know the back alleys and side streets a lot better than most.

There was no way she would risk going directly back to Shadoe's building though. No, there was no safety in bring these jerks to her very door.

Tracey checked around her and saw the front end of an SUV just coming into her view. They turned in her direction and started toward her.

Smiling, Tracey drew upon Damien's instincts and ran for the nearest alleyway.

The west end of town had an alleyway behind each and every structure and Damien knew all of them. She ran halfway down one, then cut across to the street, crossed the street and headed into the alley next block over by way of a sidewalk that led around a building to the alleyway behind. She repeated this trick numerous times until she had overshot her destination by a few blocks.

There she ducked into a back doorway and hid beneath the back steps of a local rooming house.

She crouched there for what felt like forever before she had regained her strength and felt that the coast was clear.

She had only two blocks to go to reach safety.

Tracey cautiously took a deep breath and came out of her hiding hole.

(To be continued)
If you liked this post, you can leave a comment and/or a kudos!
Click the Thumbs Up! button below to leave the author a kudos:
up
59 users have voted.
And please, remember to comment, too! Thanks.
This story is 1553 words long.

eek! will she escape?

"Reach for the sun."